I don't have anything new to report, but I feel like posting...

I thought about posting pictures of Daisy and I at fair..buuuut...I'm just going to post one. I posted a lot of photos on my facebook and I don't feel it's necessary to post them here too. I am under the impression that people don't care that much.
This one is of Daisy and I during the reining pattern...I'm thinking of actually teaching her to do good rollbacks and spins this winter. May be fun! If I recall correctly, her mom went to state for reining quite a few times...maybe she has it in her ;)

Notice me, the loser, was so worried about the pattern and such that I forgot to pull the chaps down for that class :P

I did a spider weave pattern with her mane that day ("spider weave pattern"...is there a real official name for it? :P), used 57 rubber bands (one more then 2009 :P) and got a lot of compliments...and a lot of kids stopping and pointing "LOOK AT THAT HORSE'S HAIR!" like they thought it came that way. So cute :) It actually lay flat this year. Loved it. 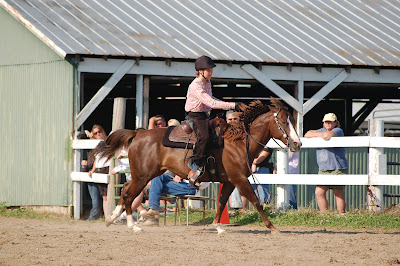 Other news...I've been looking into Tipperary jump vests, but they were all super expensive ($150-$200). I put an ad on craigslist in the "items wanted" section for a vest for up to $80 or cheaper. I received the phone number of a lady 20 minutes away who has a used clothing and tack shop (equestrian clothing) and had a few vests. I went yesterday (she's only open 4 days a month... :P) and she had two vests available: a flexrider one (which looks dorky, but I would have taken it if I had to) and a tipperary that just came in the day before. The tipperary fit! And, as a bonus, it's red with black trim! Red is our club color, and one of the combos I thought of doing for cross country *some day*, and it's sort of ironic that the trim is black because Jean always does XC in black and red..pretty cool. :) I love it.

Otherwise, camp is one week from today (!!!) and I might be doing a schooling with Jean on Wednesday! (!!!!!!!!!!!!!) :)
I'm pretty excited. Daisy's such a good girl :))
I've been using the boots...without the power straps. (I put them on, but the boots were pretty much impossible to get on with the power straps, and even WORSE to get off...I felt like I was gonna pull her hoof off altogether!) I did 2 pretty serious road rides with them, and I love them. Daisy loves them too. She steps much more confidently, and she feels better too...like she uses her body more. Pretty neat.

The horse flies are back again (started on the 1st of August. You think they understand calenders?). I always say they come in August, and here they are. They are vicious beyond belief...I put Daisy's fly sheet on, but they are relentless on her exposed neck. The only good thing is that they are super easy to kill. :P

I received my school schedule in the mail. *Shudder*.... as of tomorrow...one month left. That's a lot though! A WHOLE MONTH! :)...but yeah. It's goin' down soon.
ANNDDD! I registered to do a trail trial in our area (Like ACTHA but not) and I'm looking into doing a hunterpace in September too. I'm happy not eventing as long as I still get to play around cross country. I don't need stadium and dressage :P Not now, anyway. :)

Posted by Mellimaus at 8:25 PM

Thats called a gypsy braid. It looks smart on a horse with a nice topline.

I didn't know the Tipperary came in any colours other than black blue and green. Cool!

The tipperary I got is actually BETA approved--from Britain. But reading reviews, apparently you can get the tipperary in a lot of colors...I know someone with a purple one, too.

You should definitely do a hunter pace. They're tons of fun. And Tipperary vests now come in custom colors so you can customize them. I have to say I'm jealous. I've always wanted one and I feel kind of stupid for not advertising it. Maybe I'll try Craigslist.

And I love the netted mane. I used to do it on Indigo when his mane was longer but I like to keep it short in the summer so he doesn't get too hot.

Manes are so controversial :P I like Daisy's long because it keeps her warmer in winter, and it keeps the flies off one side of her neck in summer...I love that way to do her mane though because it is cooler. :)