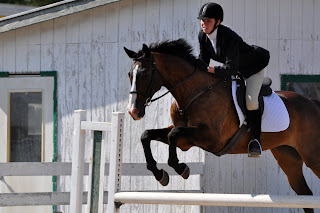 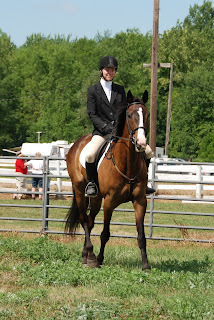 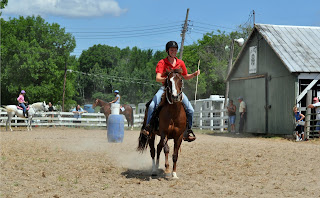 Just a few teaser pics; had a great day on Ladd, and LOVING my mare as much as ever! More details to come. Tomorrow is Gymkhana (barrel racing) with 4H, and Saturday is an open gaming show--then we are done!

The Month of July So Far

So many things to post about.
I was riding Ladd regularly at Jean's for about a week. 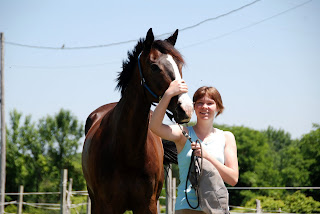 My mom was kind enough to take photos of us, as she did last year. 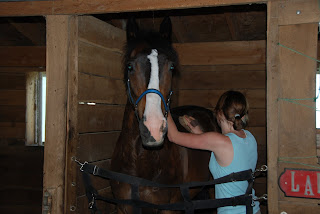 Every morning I went and rode him, first warming up in the arena, then heading out on the trails. This is Ladd's tattoo ;) 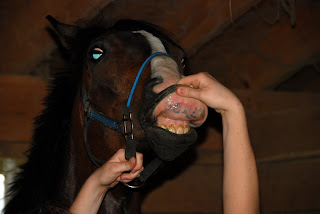 Last week I rode him a couple days in a row and had good rides, but then Thursday he completely changed. We headed out on the trails, cantering along as usual, but he was stronger than the other days. I had trouble slowing him down to make a turn so we were trotting quickly as we turned, right into a field of freshly cut hay. He sidepassed madly into the field, his legs getting tangled up with hay, and he hopped on his hinds and spun and turned. He was flipping out, for no reason. I mean, yes, there was hay on his legs, but I could feel it happening before we even hit the hay field. I turned him around, to head home back the way we came. He wouldn't have it; he didn't want to go forward, nor backward. He sidepassed the length of the field we had just cantered up, and I decided to just give up and let him cross the field and head straight home; I was trying hard to balance and not come off, and I just wanted him to stop. We weaved in and out of big round bales, and I tried to get him a job to do in the middle of the field, to teach him that his behavior wasn't acceptable. 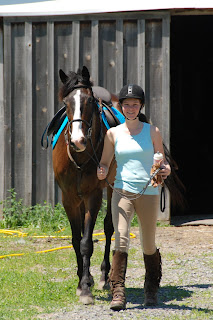 I tried big and small trot circles, canter circles, etc, but nothing worked. He planted his feet, and spun, and backed up, and rocketed forward, completely ignoring all my requests. It was all I could do to stay on him pretty much. I finally gave in completely and headed back to the indoor, intending to work him there. 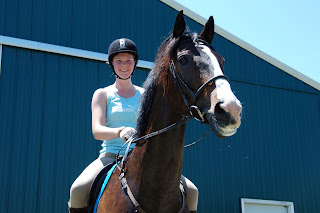 He refused flat out to give me any sort of calm walk circle worth mentioning. I finally got off and found him dripping sweat. It was crazy.


Then he was moved to my friend Katie's barn, where we have been riding together almost every day.
This month of July I've ridden him 16 times so far. I had a riding lesson on him yesterday with Karin, an instructor I've lessoned with a handful of times. I left yesterday's lesson feeling bummed about my ability to ride Ladd. I do feel I learned more about how to correctly ride and jump him, but I realize now that I'm more in over my head than I thought. He's not a horse that jumps just because you point him at something; his striding, lead, take off, landing, etc, must be perfect, or else he throws a fit of sorts. He's very in-tune to the rider's body position, and I'm not very good at controlling every small motion that I make. He's a difficult horse, and though it's been a pleasure to ride him this month, I'm not cut out for him in the long term.


I posted two videos to youtube, one of Katie and I doing flatwork at her farm, and one of us jumping.
Flatwork: 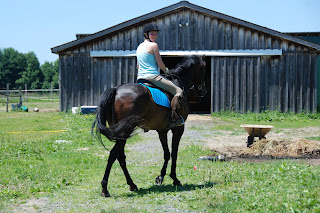 I went to my first pony club dressage rally at the beginning of July. I went as stable manager, meaning I didn't ride, only helped the other riders with whatever they needed. It was a lot of fun! On August 13th there will be a show jumping rally 3 1/2 hours away that I had planned on taking Ladd to, but I've decided to take Daisy instead. I'm excited for it! We will be trailering over the day before and leaving the horses in a stable overnight. The jumps aren't going to be higher than 2' for my division, so Daisy can definitely handle it.
This was our club at Dressage Rally: 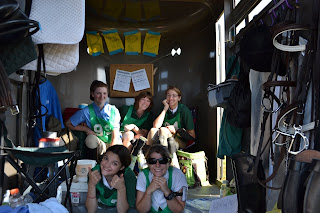 I've taken two lessons through pony club with an instructor named Abby who actually instructs hunter-jumper riders. I love her! I'm excited to take a few more lessons with her before show jumping rally; she's very positive and a great teacher.
Today I rode Daisy with western spurs because she was being incredibly bull-headed. Once I got her through that, she was excellent! I have been struggling to train Daisy to give me specific leads on a straight away, and it's been very frustrating. I was getting the impression that she either didn't understand what I was asking, or knew very well but was just being her stubborn self and refusing to do it.
It was the latter. Today with the western spurs; voila! We have our leads! I'm so excited to say that she totally knows what lead I'm asking for when I press her with certain legs with the spurs on. I don't even need to touch her with the spurs, just their presence makes a huge difference! Success at last. I have a feeling the flying lead change is in the future :)
County fair is this coming week! I will be showing Ladd on English day, Tuesday, and Daisy Wednesday through Saturday in mounted games, western, and barrel racing.
A fellow 4Her has also offered one of her draft horses for me to show in a draft horse show Wednesday night. I'm going over to ride him today to get to know him a little; the classes are very laid-back.
I probably won't post for a bit; busy week ahead!