Hello!
Daisy's home again! Jean trailered her home yesterday. Daisy was fine for the trailer, as always...when I first got her she didn't like trailers and was bad for loading, but now she's fine. She just missed her buddies for a little while and looked kinda confused. She whinnyed a lot, like in the video above. But now she's fine; I knew she would be, she just had to get used to the place again.

I do have a new blog, http://lifeoutsidethebarn.blogspot.com. I haven't posted anything major on it, but that is where I will be sharing about my trip to Germany, as well as an update on the chicks, who moved into the big coop yesterday! :D Video will be up soon.

Talk to You All Later! 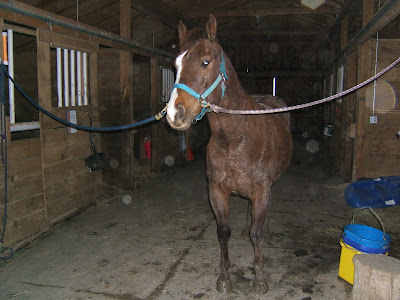 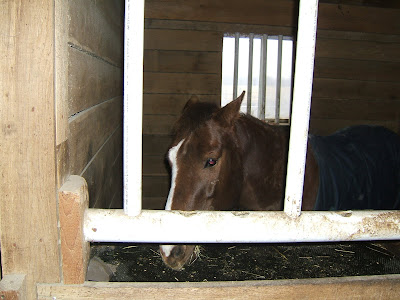 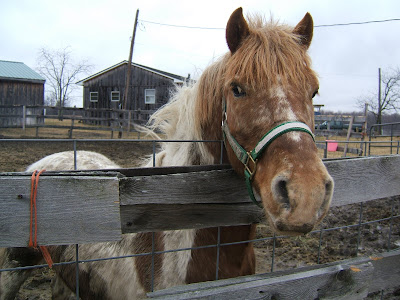 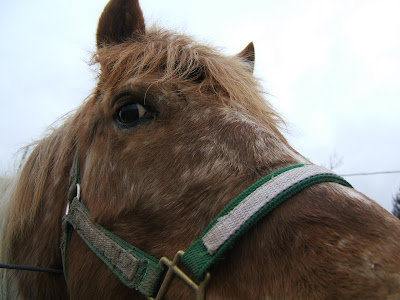 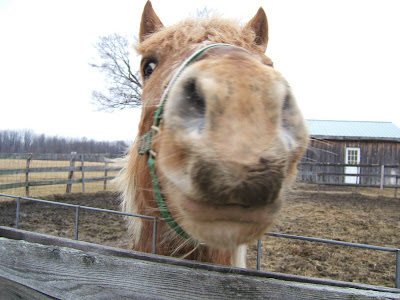 I just wanted to let you all know, I probably won't be posting for a little while. I'm going on a trip. I'll post pictures when I'm back!

The first pictures are just a couple of Daisy recently...she's staying at Jean's while I'm gone. The horse that's not Daisy is Jean's new horse, Scout. He will be a lesson horse. He is so sweet!!! He's pretty cool...he had never had his feet done, been vaccinated, probably never been wormed...but he looked awesome! His hooves look great for never having been done, he had good teeth (according to the dentist who came) and...well he did have worms. But still, he's a great example that horses when left on their own (kinda) will survive. He was kept in an area with rough land (hooves) and was pretty much wild...but well trained. He was a daddy quite a few times, too. He's SO sweet, though! Apparently he was great to ride, too. He seems like he would be.

I'm going to write about Gronemeyer and Genevieve because I didn't really ever cover how we got them sooo long ago and because I have nothing else to post about...

We originally had one barn cat, Gronemeyer #1, but we didn't know what we were doing, so he disappeared one day and didn't come back.

We moved on to these two. We found out about them from a free kittens ad in the paper. I called the people and they said their kittens had disappeared and they'd call us when they got back (lol...). Well they called while I was in school the next day, and my mom was in town, so my mom went and picked them up. We didn't have a cage with us, so the people made us a "cage" out of an old litter box plastic container. The cats were SO small. We let them loose, and they both ran right away under the floor of the tack room and didn't come out. I was afraid they'd die there and ew...but thank goodness Mr. Gronemeyer is such a sucker for food. :) I put wet food outside on the floor of the tack room, and he came out (of course) and went to eat and I stuck him in a cage. But Genevieve doesn't fall for just anything (like food). She came out, though, because she was lonely, and I caught her. For the first week, she shook really hard when you picked her up. She was SO tiny! Gronemeyer was always pretty good about being picked up. I personally think Genevieve was the runt of her litter, because she was smaller and frailer then Gronemeyer for the longest time. What cute cats, though. We had to keep them locked up for 2 months to keep them safe. If the barn door was open so Daisy could come in, they were in a cage. If the barn door was closed, Daisy had to be either in or out and they ran free. They played in Daisy's pile of hay when she was eating, and cleaned up Daisy's extra bits of grain, too.

The day we let them out was very exciting. The world was already snow covered when they stepped out for the first time.

We had them fixed last February (I think...) when they were still pretty small. We had them spayed and neutered at Habitat for Cats, which does it for just $35 for stray or outdoor cats (barn cats). They were kinda funny in the car ride home---still all drugged up ;-). Now they are happy cats...Gronemeyer still gives us a scare now and then, leaving and/or getting into cat fights...but he's always ok. They've both gotten stuck in trees...I recall a day where I walked down the driveway calling and meowing (the neighbors already think I'm weird, so it couldn't really get worse ;-)) trying to find them, and lo and behold, they were "stuck" in trees, side by side.

Genevieve is the motherly figure to the cute but slightly dumb brother. She'll be waiting on the saddle rack in the barn when it's time to come in, and when I carry him in (he doesn't go in himself..he's always roaming) I hold him up to her and she always licks him twice on the forehead. They sleep together at night and to keep warm, too. And they are both quite the pros at killing nasty creatures-snakes seem to have "disappeared" and moles and chipmunks don't last long here. :D

Those are my two little babies, now almost a year and a half old...idk if this post was really necessary but it was still fun. :)

Have a good week, everyone! I'm still meaning to post a vid. of Daisy sidpassing over poles, but it just hasn't happened so far...