I'm so thankful for my Savior who rose on this day.  I often think that people must think I'm a Christian because my parents are, or something of that sort. . . but that's not it at all. I've experienced the love of Jesus firsthand. Our family went through some horrible things in the past, and we would not have made it without Jesus. When I think back on how blessed I am and how he has been my rock through so many things. . . I feel like dancing with the people in the video.


Happy Easter everyone! I hope you all have a wonderful day full of food and celebration with loved ones.
Much love,

Everything, All At Once

Here's an update on everything, all at once and not in the right order.
This photo was taken while Daisy was colicing. She ended up spending a full day with lots and lots of sleeping lying down. 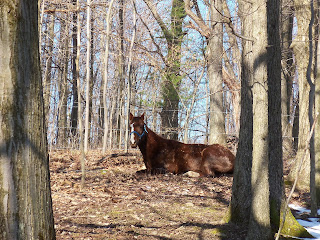 This was one of her hoof prints on the drive from us walking up and down. 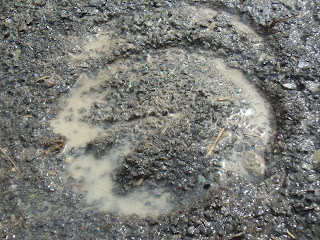 Sunday evening I gave Daisy some hay and she actually enjoyed it. 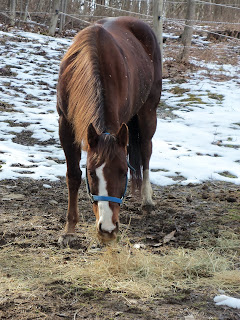 This was before Sunday evening, this was Sunday afternoon, as Daisy napped in her stall. I sat right next to her as she lay down, which was a sign that she was feeling really bad. 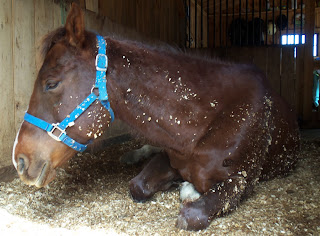 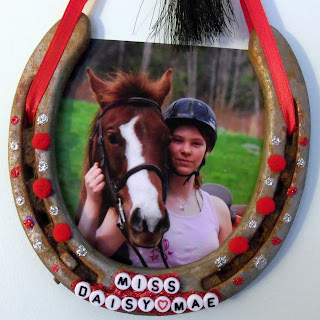 Daisy got over her colic. The vet came the following Wednesday and I discussed it with her and she suggested I put Daisy on a daily dewormer to prevent colic. I thought about it, and have decided to put her on Apple Cider Vinegar again like last fall instead, and only resort to the dewormer if it doesn't work. I'd rather have her on something natural like the vinegar.
This photo was taken Tuesday April 12th, when I took Daisy over to Jenny's for the night. 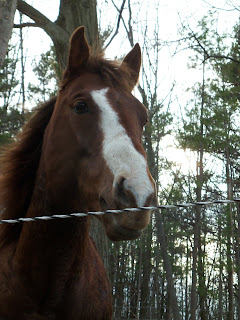 Itching on her tree :) 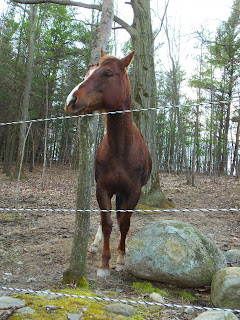 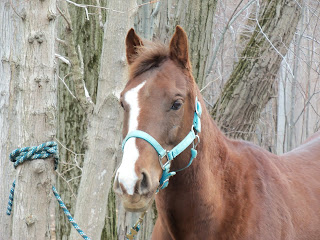 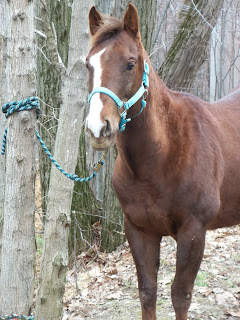 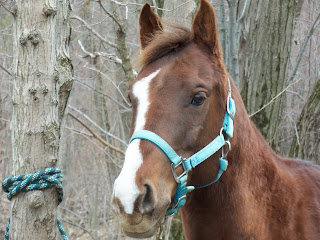 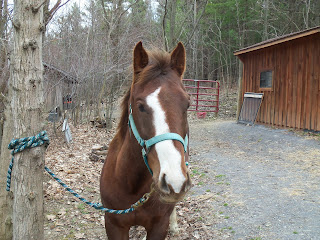 Daisy tucked in her old stall at Jenny's farm. She slept there Tuesday night, and Jean picked her up while I was at school on Wednesday and brought her to her farm because I needed her taken care of while I. . . 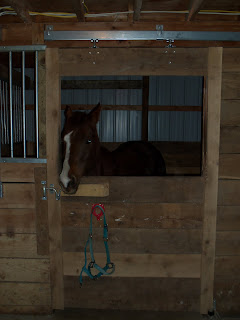 Vacationed in Germany! :) This is a panorama shot of houses along the Rhein river in Mainz, Germany.

I went to Germany with my friend Stormy.  This is us in the vineyards of Kiedrich, Germany. 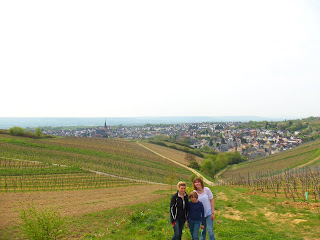 This was us at a castle tower in Eltville, Germany. 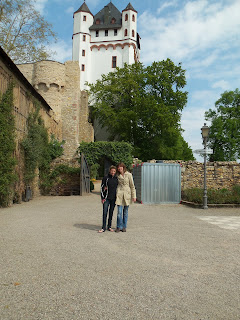 The view out of the Eltville tower. 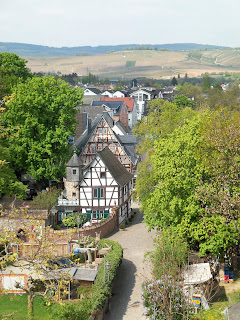 The "Mouse Tower" on the Rhein. 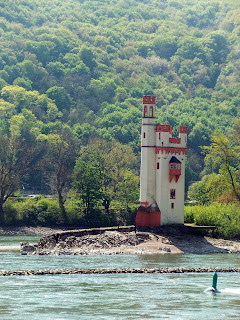 Us leaning out our bedroom window in the Castle Stahleck youth hostel. 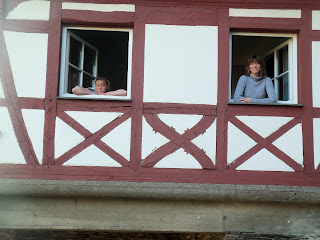 The only horses I petted while in Germany :) some cart ponies in Obersdorf in the Alps. 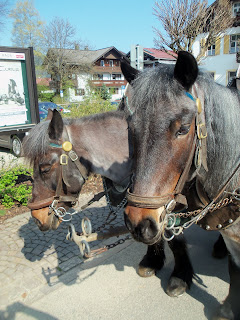 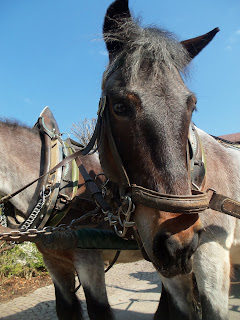 I was surprised to see them come down the street soon after I said goodbye to them in the middle of the town. 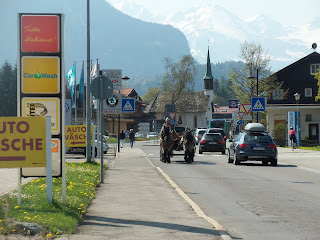 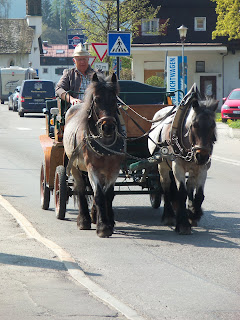 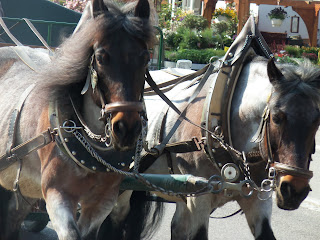 Daisy is home now, still trying to gain back weight she lost when she coliced, but she's close to her regular weight again. She is almost shed out and feels and looks so soft and pretty. I bathed her legs, tail, and mane today. I love when she smells like baby shampoo :)
Sorry for my lack of update,

I'm Not Sure What to Think

Daisy is still sick. Not as dramatically as the first two days, but she's not well. I've been doing a lot of hand walking, a lot of monitoring (including at 3am), a lot of thinking, a lot of wondering.
Plus, considering the time I take to provide fresh water (with ACV added right now), she just drank out of a muddy puddle in her pasture. Figures.
We have an appointment with our new vet for spring vaccinations and to get more Banamine on Wednesday.

Spring is Right Around the Corner. . .

I came home from school yesterday to a colicy horse. This is evidence that spring is here, or on it's way.
I headed out to the barn around 3:30 and found Daisy completely muddy, soaked through to the skin in places. This was weird considering that Daisy is not a big roller at all. I took a look at the ground and realized that there were paw marks... everywhere. Some places it looked like she'd been digging to China. I could also see a roll spot, and eventually found two more spots, plus evidence that she rolled in her stall. I took her right out on the driveway and walked her a bit, then brought her back and let her loose. She didn't paw again, so I threw a cooler on her and cleaned out her stall. I came back fifteen minutes later and she was pawing again; more walking. After about 15 minutes my mom reminded me of the banamine (I'm really not sure how I forgot about it. . . ) and so I gave her a dose and kept on walking. She started shivering even in her cooler, so I took it off and put her thick blanket on.  I let her loose one more time, but she pawed again, so we kept walking. We ended up walking up and down the driveway for over an hour. The banamine took a long time to kick in, but it finally did and I could leave her with a bit of hay.


This morning she seemed better, though lacking her usual zest for food. I left for school feeling the worst was over, but got a text from my mom later on saying she was pawing again. I got picked up at 11:30 already and came home to find her doing much better. I walked her up and down once and splashed some apple cider vinegar in her water for digestion, put her cooler on (she was soaked again), and left her. She seems to be better now and eating normally, but doing a lot of sleeping lying down in her stall. I'm not really worried about it though; She's closed in with the bottom half of her dutch door and I think that makes it inviting to lie down. I think she's just recovering; she seems fine otherwise.


Needless to say, I ordered 10 16oz bottles of organic ACV again. I used it last fall and she didn't colic so, fingers crossed it works from now on as well. I'm making an appointment for hopefully next week to have her new vet come see her for her spring vaccinations and coggins, and a fecal test and to buy more banamine (I'm down to one dose).

Posted by Mellimaus at 2:50 PM No comments: