Ground Driving, A Ladd Update, and Expanding Our Horizons

Sunday evening I ground drove Daisy for the first time in at least a month and a half. I wasn't sure what to expect, but. . . she was excellent! She was completely responsive to my voice commands, which is interesting because I don't really use them while riding (at least not the forward commands; I do use woah). I really want to get a cart and hook her up, but I'm leery. . . I was hoping I could find a cart in the area that I could borrow just for the first time to see if she could even handle it, but I didn't have any luck. So if I do it, it would require driving an hour or so away to pick up a ~$500 cart, in the hopes that Daisy even takes to it. So at this point, I haven't done anything more than think about it.
Monday morning finally left time for me to ride Ladd. He was full of it, as seen when he came cantering up to me full speed in the pasture and almost plowed me over. He had canter on the brain the whole time we were in the arena; I was trying to ride my PC dressage test with him, but the trot circles were turning into fights to see who would win; me at keeping him at a trot, or him at winning a canter. He was lathered up and sweaty after a half hour, and I took him out on the trail. He was surprisingly well behaved. I admit I'm a little anxious about riding him outside because when we canter, I always have the feeling that I'm on the edge of losing control, and I hate that thought. Not so on Monday; he was right in my hands the whole time, energetic, but disciplined.
This is him and I before our ride: 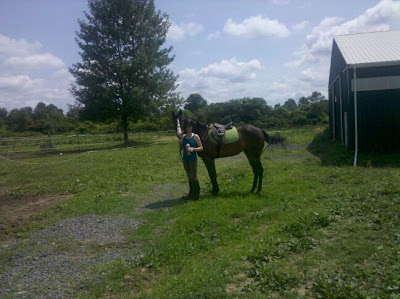 Tuesday morning I took Daisy out for a ride Western. We headed out on a road we generally ride on, but we didn't turn back where we normally do. She was getting bored and lazy with the roads we always ride on, so we carefully crossed a busy road onto a new road. As I expected, she instantly perked up and was curious about her surroundings again. Love that!
The last time she was trimmed, I fear she was trimmed too short (in fact, I know; her sole was visibly too low to the ground) and as a result, she's been sensitive on stones. This aggravates me, because trimmed correctly, I know she (and all horses) can be sound, but being an advocate for barefootedness is not easy when my own horse isn't sound. I've been using her easyboot gloves for every single ride, which solves the issue and she's fine that way, but I still wish she could just go bare.
Ah well. Onwards and upwards,

The hunterpace took place this past Sunday, and I waited to post hoping that the other photographer on site would post the pictures, but he hasn't yet, and so I'm going to go ahead and post.
What a great hunterpace it was! It was an absolute blast. All but the last picture are by  Lydia, and I love them :) 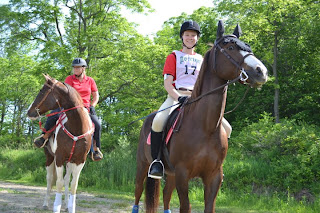 Jenny picked Daisy and I up at our house at 9am. We were on the grounds less than a half hour later. The weather was perfect! About 70-75 degrees, not buggy on the trail.
I was pretty excited to wear a pinny. ;) 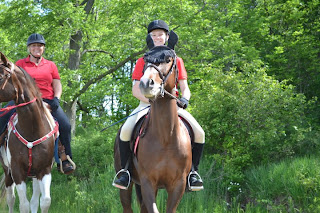 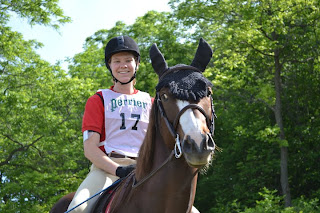 I had switched Daisy's snaffle out for a kimberwick, and I'm happy to say she completely respected it this time, unlike our first hunterpace. There were jumps spread out throughout the course. I remember jumping 13 of them, although there might have been more. There were lots of log jumps, and then some more interesting ones. The second one we did was a stone wall. The last time we jumped a stone wall, we took three tries to do it decently, the first time over Daisy had literally crawled her way over it (haha; our first cross country schoooling). This time, she jumped it perfectly! The logs on course were nice; not small jumps at all, but tall and wide. We jumped the majority of them, and I was thrilled with how she handled them. She never refused the entire time, and she didn't knock a hoof anywhere either.
The pic below is of the first jump, taken by photographer Bill Gamble. I think he probably got one more mid-air over the jump, except Skyler (Jenny's mare) was probably blocking us because she freaked out a bit :P oh well. 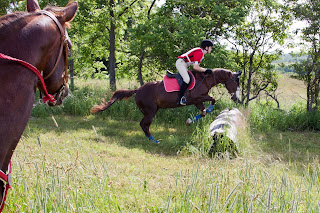 On jump in particular was my favorite. It was a tire jump, with lots of different sized tires. The sides of the jump were just a jumble of rusty metal tractor parts. Apparently people chose not to jump it because if their horse were to duck out, they could injure themselves on the tractor parts. I didn't think that far however; I just thought it looked like fun, so Daisy and I jumped it. She was great! She didn't spook at any of it at all, and it was relatively big and such a blast to go over. Gosh, I can't make it up, she's just good at cross country :) 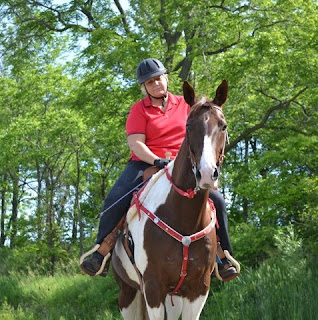 Jenny's mare Sklyer gave us both a pleasant surprise with how well she handled everything. She took everything like an old pro, even went first in front of Daisy to cross a wide stream of water. She kept up with our gallops and was just really good :) It was great to have Jenny along.
Oh, and best of all ---- we placed fourth out of thirty in the division! WHOOT! :)
Until later,

Much good has been going on on my life of late. . .
Tuesday was my last day of school; now I only have state exams the next two weeks (Only two left now). I've decided to home school next year, so the last day was bittersweet. This was Daisy and I when I got home. 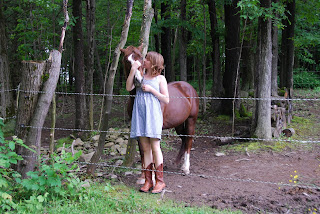 My cats are basically the most adorable things you will ever see. This his Gronemeyer: 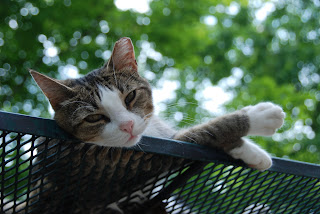 With his sister Genevieve, lounging together on our patio table this morning. 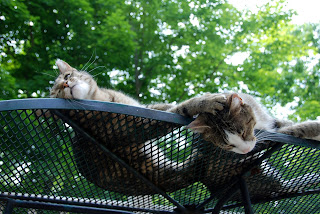 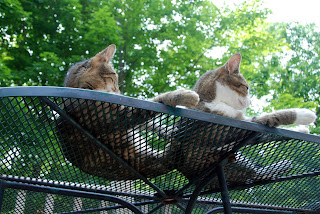 And then there's Miss Daisy, chest-deep in grass for an hour or two a day, depending on how bad the deer flies are. Nom, nom. . . 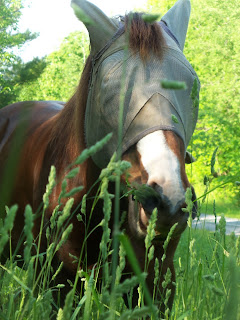 We've been riding over to Pony Club mounted meetings every week, which have been fun. We've worked on flat work and jumping. The last two weeks we practiced in a dressage ring. This past Wednesday was amazing! I remember to wear spurs and Daisy's dressage felt absolutely wonderful. It probably didn't look that great from the outside, but as I rode I could feel how awesome it was. Our instructor had me focus on sitting up straighter at the trot and canter, and boy. . . as soon as I fixed myself, Daisy's canter was much lighter and less forehandy. Funny how that works ;)


Tomorrow we're riding in our first off farm event of the year! I wasn't sure if we'd be doing anything until county fair, but our PC group is hosting a hunterpace as a fundraiser, and Jenny agreed to take me along and ride in it with me! We trail cleared last week and it looks like it's going to be a great time. I'm so excited! I rode 5.2 miles with Daisy yesterday to prep and she was marvelous. It was the first time doing the 'long' block this year, but she was full of energy, so we did lots of trotting and cantering (in her easy boots) and it was just grand :)


I'm going to be showing Ladd at fair next year! I'm going to try to get out and ride him more often from now on. He's a 17hh TB that I was riding last summer already; he's a riot :)

Click to enlarge photo
June 3rd, 2010, my mom surprised me with a visit to the lesson barn I learned to ride at, and rode at for 8 years. My favorite boy Patchy was still there, and I was thrilled to see him again. I owe a lot to him.
A friend told me that he was put down in February due to a bad colic.
I love you Patchy.
Other Patchy Posts:
If It Weren't For Patchy
Sunday Stills: Horses
XC Schooling & An Old Friend