If there was ever a time that school was keeping me busy, it is now. Midterms are this week. The good news is, I don't have school at all on Thursday...and technically not Friday, although my Friday is filled. But Tuesday and Wednesday I have testing. Joy. So here I am. Posting. ;) (I should be studying..... )
I took these pictures last week Monday, on Martin Luther King Jr. Day. Below are Jayda (right) and Skyler (left), Jenny's horses. I love how the photos turned out. These are just two. The one below is slightly edited....the next ones aren't at all. 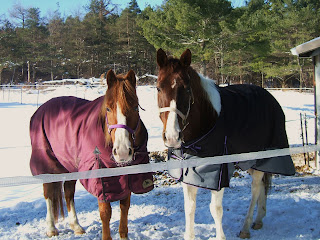 And Daisy-- Her friendly face. ;) She really only comes in one flavor: grouchy. But it's generally just an act ;) 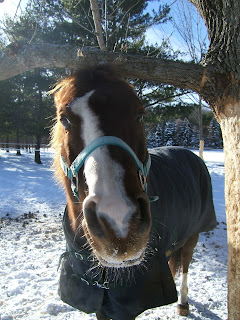 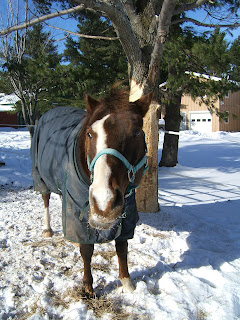 I took her home soon afterward. My parents went on a week long trip, and even though the barn where Daisy was at is only a mile down the road, we thought it'd be easier to have her home and not have to get rides there daily.
I ended up only taking her harness home, so this week was just harness stuff. 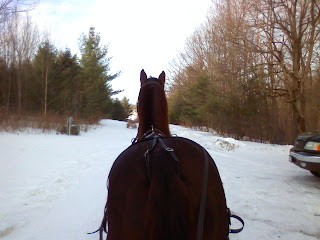 I was surprised to find that she was a little spooky going out the first time on the driveway in harness. It wasn't extreme in any way...but she's normally very stoic, not looky or alert at all. Under harness however, she was alert and a little hesitant to proceed. Once I talked to her a bit and convinced her it was ok, she went. 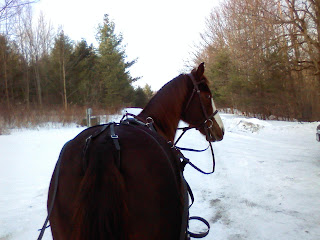 I learned something this week: appreciate the length of reins used in riding. Because there's a big difference in ground driving with long reins and trying to discipline a horse, and simply riding and disciplining. Daisy tried every chance she had to turn around and go home; whenever I asked her to move onto the driveway from the side. The frustrating thing was that I had no real control over it; it's hard to figure out how to be demanding in what you ask when you have to legs to use on her sides. I ended up walking to her side each time and shoving her in the right direction. She figured it out.
Thursday I worked with her and a sled. First I just walked her around the sled on the ground, then I walked at her sides, pulling the sled next to me on each side until she was comfortable with the noise and appearance, and then I looped the sled's rope over my arm while I ground drove her. There was a slight initial shock, but she was completely over it in 5 minutes. And don't let the snow kid you; the sled still made a loud scraping noise. 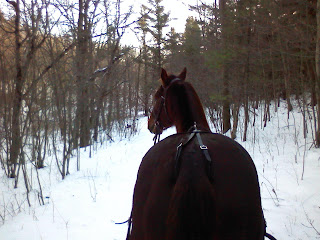 Saturday I had my friend (Lydia) sit in the toboggan and I sat on Daisy's back and pulled her. It was hard to get moving from a stand still; I almost slid off the back. So Lydia would get the sled moving, and then we'd pull it. Daisy did really well with the weight! She wasn't spooked by it at all. We even did a tiny bit of trotting.
At one point this week, I went in the house in the middle of stall cleaning to get something, and got held up. I was gone about 20 minutes, and came back to find this... I think this was her escape / steal dinner plan. It didn't work either way. Haha :) 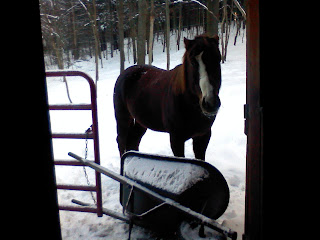 Today Daisy has a cough. She coughed a couple times yesterday, but I didn't really acknowledge it. Today she's been coughing all day...mostly when she eats hay or finishes eating it. I don't think it's really caused by the hay; it's the same hay she always eats, it's not visibly dusty, and she gets most of the hay that she eats shaken out anyway. The one horse boarding at Jenny's got a bad cold a couple weeks ago, and now two of Jenny's horses are coughing too, so I think Daisy has the same thing. Even though, it's a shame. I'm going to give her a few days off (although I may end up riding her back to Jenny's tomorrow) and see how she is.
What do you do for a  sick horse?
Talk to you all soon.
Posted by Mellimaus at 7:54 PM 3 comments:

Hello all!
I had a lesson today...first one since camp in August ;)
I've decided to aim to take a lesson every two weeks...it went well! I'm using a new instructor...she was much more positive than my old one. I won't say more on that topic.
We worked a lot on having Daisy bend and supple, and transitions from walk to trot to walk to get her energy up, and direction changes across the ring. I thought it was a pretty good productive lesson (spurs next time!) but then I saw the videos...she looks lovely! ;)
I know the beginning she's pooping. Figures; how awkward ;)
But otherwise....  hint: 1:10 is particularly awesome ;) I'm very happy how it went.