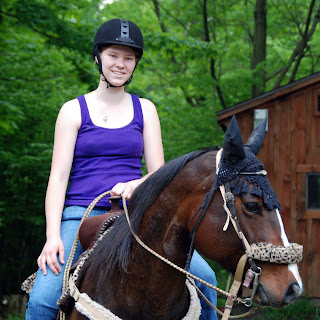 The above gorgeous mare is Jordan, owned by Jenny. I rode Jordan three times this past week to prep for the memorial day parade I rode her in this morning, to get to know her better. She's initially very quick; very sensitive and responsive to any sort of leg movement, constantly looking for an excuse to burst forward into a trot. Besides that however, she's surprisingly easy to stop. She's more comfortable outside on a road than she is in the arena, and she seems to have a 10 minute warm-up period, after which she suddenly settles in and settles down. She's responsive both to speeding up and slowing down, within the gait itself as well. At first I wasn't sure if the parade was such a good idea, but she really grew on me this week as I rode her.
She was excellent during the parade today! She wasn't really phased by anything, not the cars/firetrucks/band/color guard/children/other horses, etc. Only during the last two minutes, when she stopped and pooped, did she suddenly get anxious. It was very sudden and random, but luckily it was the end of the parade so it didn't really matter. She was a pleasure to ride :)
This picture is from our ride up to our house on Saturday.
Happy Memorial day, and thank you to our veterans and soldiers.

I officially joined Pony Club two weeks ago. My best friend Lydia is part of a pony club which holds some of the mounted meetings at a farm a mile down the road from me. 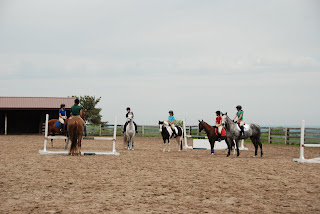 With monetary support from my parents (Thank you :) ) I joined the club! 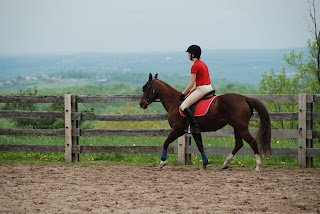 The first event I took part in was a jump position clinic yesterday with instructor Karen Marcotte. 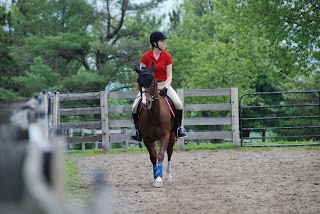 It was my first time seriously jumping Daisy in only a snaffle, and well. . . 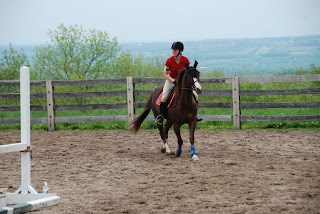 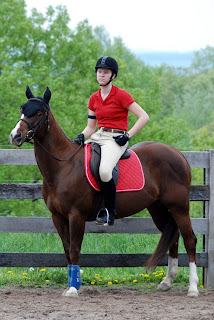 We warmed up a bit over trot poles, then each person schooled over a course of 8 jumps twice. I was in the "green" horse lesson, and boy am I glad considering the shenanigans Daisy allowed herself once we started jumping. 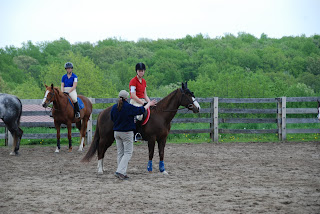 I like to call the picture below "The Flash". She was relatively lazy during warm up. It didn't last long. As soon as we started jumping, she was off like a rocket. Our first jump was a biggish vertical with a box underneath, and it was the one jump I was thinking she'd have trouble with. I was right, but not in the way I thought she'd have trouble.
She took off coming up to it, and by the time she got there she was flat out galloping without any sort of brakes and she launched herself over it. To be honest, that first jump was a complete blast, but totally out of control. It was moderately embarrassing, however it was so much fun I don't really care about how much of a fool we made ourselves. 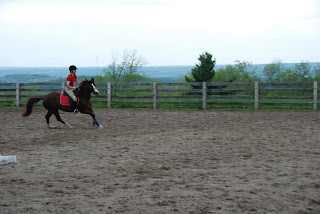 I didn't really think Daisy would refuse any jumps, because she rarely does. She refused this jump though. I don't have any pictures of the other side of it, but it is painted white on the other side with bright neon green horses stamped on it. Plus, the way the pieces were set up, the jump had a tiny bit of depth and I think that added together made her stop. It was not a real whole-hearted refusal though. If I had had leg on her as I should have, I think I could have kicked her over. Instead, we circled (*choke*. I HATE circling before a jump! It teaches them the wrong thing and I know it. I would have rather kicked her over from a standstill like I always do, but I wasn't sure if that's frowned upon :P) and she backed up and refused for a couple steps, but then 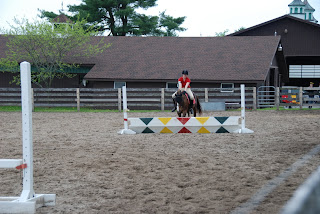 I got her over. 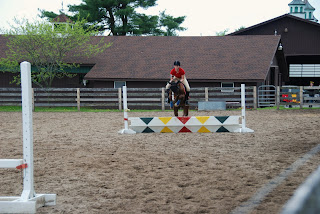 The rest of the course was just as the beginning, not quite as bad, just very quick. She didn't jump flat though, I'll say that. The thing with jumping is that, no matter how terrible it goes, it's still a blast :) 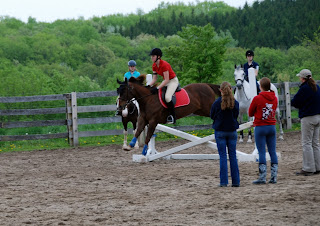 This is my friend Lydia on her TB/Percheron cross Bella. 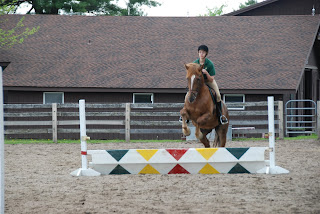 This is from our second time through the course. Daisy was a bit slower, but still speedier than she should have been. We didn't really work on my position because we were trying to edit hers :P. The instructor made a good point that I shouldn't stop giving her leg simply because she's racing already. She encouraged me to maintain leg pressure so that we could keep in a rhythm, and that Daisy would eventually learn that it would be easier to go slower since I would be forcing her to keep a steady rhythm either way. It makes sense. 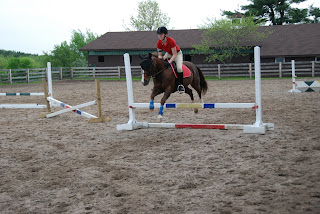 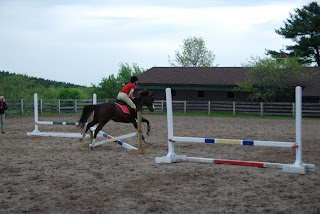 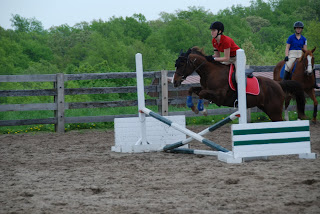 We looked pretty silly racing through the course, which makes me think I need to go back to a kimberwicke for jumping in the future. I'll talk to my instructor about it. 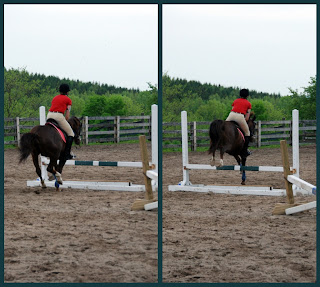 Overall, I had a great time, and my mom took great pictures :)

Next event is a mounted meeting Wednesday afternoon. Should be fun :)

We've been getting a lot of this lately: 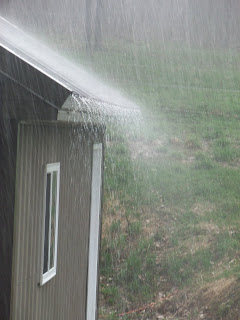 Which means riding has been a bit halted. I ride whenever I can, whenever the weather is decent enough. I'm not a big fan of riding in rain. . . not because I dislike being soaked (Well, I do, but. . . ) but because Daisy has always been funky about cars driving past on wet roads. Plus it decreases my visability as I ride, makes the road slippery, affects my ability to hear cars coming up behind us. . . etc. So I generally don't ride if it's raining at a good clip.
Today Daisy went out on the lawn for a half hour, for the first time this year. She enjoyed it.
I was taking photos, until I was ambushed. Miss Genevieve: 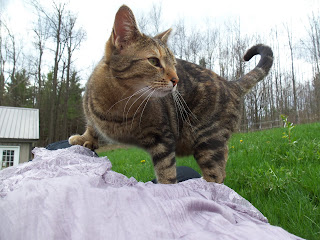 Besides some cropping on the one below, these are SOTC. :) I love my new camera! 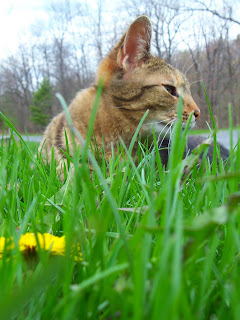 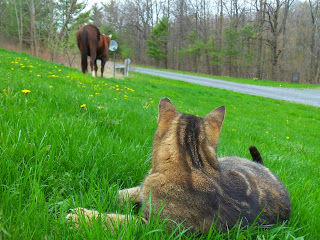 These last two required a bit of zoom, and so I edited them on picnik.com. Not the greatest colors. I was headed into the house when I realized the other barn cat was visiting with Daisy as she grazed as well, albeit much closer. Daisy and Gronemeyer: 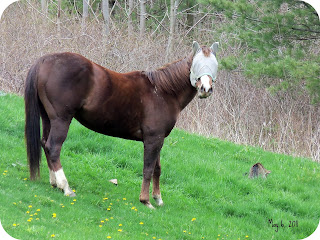 Gronemeyer has been known to plop down in the midst of herds of deer (. . . are groups of deer herds?), only to stand up after awhile and surprise them, making them scatter. 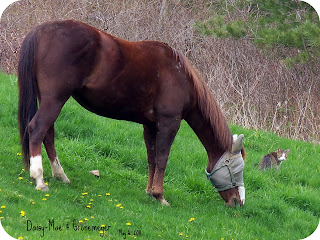 I went riding on Wednesday and has a great time. You know those moments where, despite the fact that you've heard it a million and one times, something suddenly "clicks" and you GET it? I was riding and thinking about this photo I saw that Smartpak posted of a Rolex dressage rider. Someone commented on how very closely the rider's legs were literally wrapped around the horse. Having seen the photo, it was all of a sudden much easier to understand and do, and voila, Daisy framed up really quick! :) I love it.
My silly horse. So many times I ride and feel bad and think she's tired. . . but the last week she's been so FULL of it coming home. We always gallop the same straight stretch on the road, about a quarter mile, and she was hauling this week. And proceeded to gallop her way up hills following as well. And I thought she didn't have the energy. . .
I'm so gullible.

Posted by Mellimaus at 11:13 PM No comments: