I took Daisy out on a-what turned out to be- short ride yesterday between rain showers. Daisy is part thoroughbred, and so she loves, loves, loves to canter. I get easily irritated because she doesn't like to stop on my terms, which are a) now. and b) when I ask, not seven strides later. I try half-halt slowing her down to stop, remembering to exhale, sitting deep in the seat, saying whoa, slowing the motion of my body, and then I resort to one-rein circle stops, or 'pulley reining' (emergency stop). So yesterday on our ride Daisy again didn't want to stop, and so I threw in the towel after so long and after asking nicely, I pulled hard on the reins. I felt bad, but somehow, she got the message. She FINALLY stopped, and the canter-->stop transitions after that were much better. All along, here I am trying to be just, and I finally give up and I get results? Oh mare.

This is a video Jean put together of our group of 4H kids at the trail rally two weeks ago (which I haven't posted about. ..). Daisy and I didn't place this year. We couldn't do the noodle-curtain obstacle, although the people there were incredibly nice about letting me have time to try schooling it and ultimately get off and walk her under it for the experience. I also practiced on a tarp all week long and yet when we got to the tarp obstacle, I was told to move on after a very short time-20 seconds? Because apparently Daisy refused twice (two minutes or two refusals). I was irritated because it let her think moving on was ok ... but I know others have complained of that in trail trials as well. :-/ I did write a comment about it on their survey, so hopefully next year they'll have more schooling opportunities like the curtain obstacle. Anyway, the video is fun and includes some jumping-enjoy :) 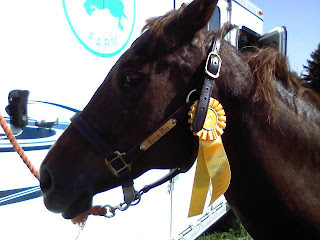 Hello all!
Daisy and I have been busy. . . trail trial, driving, giving riding lessons, and today was our last event of the year, a hunterpace!
Daisy was a good girl. Lots of galloping in a group with 4 other horse and rider pairs, and jumps! She was one tired girl at the end. We won third place!


We're officially finished with the driving training under an instructor, cleared to practice on our own! Can I just say how much I love my horse?! She's such a smarty. She was nervous a few times while training, but when you'd give her a few seconds to think about it, we'd be able to move on. We've been driving on our driveway, and the only option to turn her is to turn pretty tightly, so she has to cross her front legs over really far, but she's doing it! And in both directions.
I have my own laptop again! I'm hoping that I'll be able to post more again about everything else that's been going on. Until then,


Hello all!
Quick question. . . I'm going to be riding in a trail trial again this coming Sunday, and am trying to pick out what tack to use. I'd rather ride western because it's so comfortable, but I learned last year when I did that that Daisy will not respect a western curb when in the midst of a cantering group of horses. . . so it would be smarter for me to ride English with a snaffle, because if worst comes to worst, I can easily pull her in a tight circle to stop her. So I'm wondering, is it ok to put the english snaffle on my western headstall, like for a young western horses in training? Does anyone have any experience in this? Thanks :)
Daisy and I are keeping busy. . . I rode her home from my friend's house last week ,which required riding through a small hamlet near us. How fun! Unfortunately a couple of Dumpsters freaked her out and I had to hand walk her part of the way ;). She can drive pretty well at the walk now; she needs an occasional helper to come up and reinforce the 'walk' command because she doesn't go right away, or she tries to slowly back up.  I had a new laptop for a  day and then it was broken accidentally :-/ So unfortunately, my posts are still limited. I have pictures of fair I'd like to post, but we'll see when that happens. We're riding in the trail trial next week, and another hunterpace in two weeks! I'm excited. This has been a quiet year for us showing wise, and I'm surprised that I really do miss it. . . so I'm glad we'll be getting out a couple more times.
I hope you're all doing well! Sorry I've not visited your blogs and commented.