In an effort to spread Christmas cheer to you all, I was taking pictures of many of the animals at our ranch. When told that the pictures taken of themselves could end up as the Christmas card on the blog, most of them hastily tried to get themselves looking pretty...some others were just gorgeous enough not to have to worry about that.

Below is the picked shot of my first target, Huey, a hamster currently residing in my bedroom due to his owner, a friend of mine, going off to other places for Christmas. He was sure that the camera was nothing to worry about (he was OBVIOUSLY lookin' good, why worry?), and that his problem at hand was really how to get out of the cage...anyhow, this is the shot I got of him. No go. 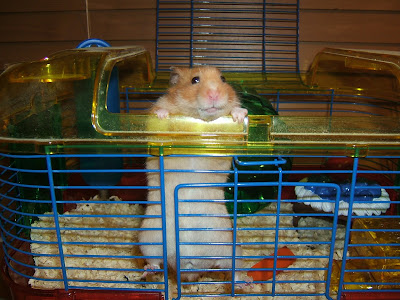 Then there was Gronemeyer...I was in a hurry, so (although he claimed he wasn't ready) I took this picture...I told him it was nice of him to consider hygiene at that moment, but that it wasn't gonna cut it on tape. 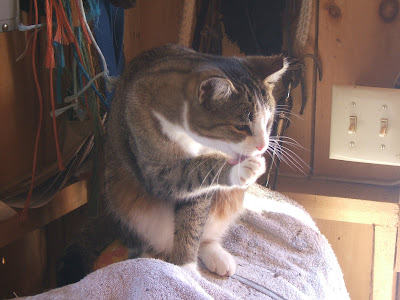 Then, of course, the ladies. Survivor ruined the moment by, just as I was clicking the button, leaning over to ask Bibbi if her feathers were on straight. *snort*. But then, of course, there was Bibbi with her head slightly turned...I pretty sure she was asking Survivor "Which is better? My right side or my left?"... Chickens these days... Figures, right? 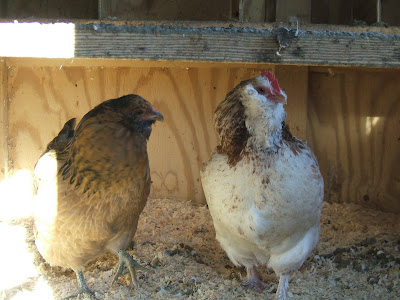 Well...the next picture wasn't completely Abby's fault...I wanted to have her dress up in her nice fire engine scarf, and...well, it didn't really turn out. On a good note, she seemed to like it, and she didn't bother to try to take it off. 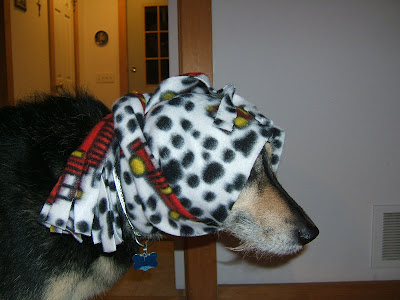 Then, of course, the spotlight was on Sasha. Abby would say that whenever Sasha's here, it's on her, but I'm not sure...Anyway, she's my neice...er...brother's dog. She was pretty tolerant of the antlers--as long as there was a treat to keep her eyes on. She almost made the card, but no go as well... 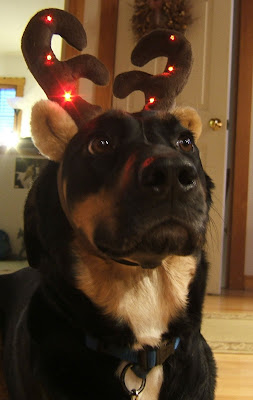 Now, Genevieve is the fairest little lady on the ranch. Such a sweety. She didn't bother getting ready--she's always clean. Anyway, I heard "Angels we have heard on high" singing in my head when I saw how the pic turned out...sooo yeah...she almost almost almost made the card... 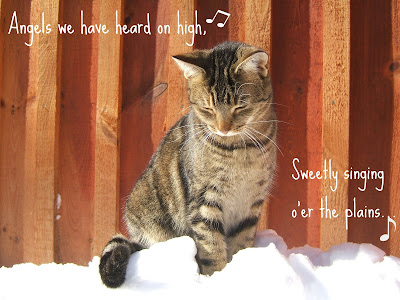 WHO'S SURPRISED?!
I bet I know what you're thinking! How about:
Wait a minute.....somethings fishy...this blog is about Daisy...and Daisy made the card...this wasn't a fair card contest! 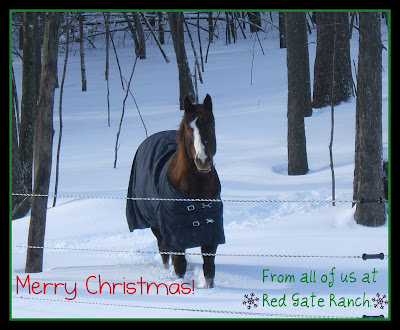 You're probably right.
In the end, all I wanted to say was...

Merry Christmas everyone! May you have a safe, happy holiday.

Just Another Taste of the Concert

An Excerpt from Last Night's Concert

Pictures of the Gatsby 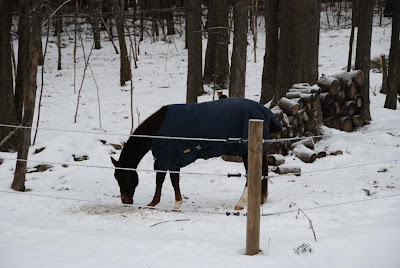 Notice how dark her coat got?! It's crazy! 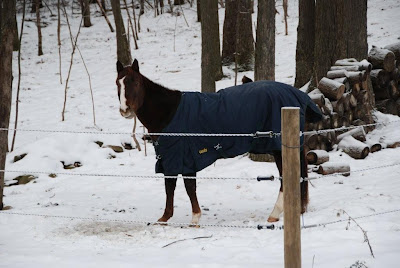 Thank you, Mom! She took these pictures of Daisy with her blanket this morning...I really really like the Gatsby blanket. It's not one of the more popular brands, but it's obviously a good blanket, and it's built well...some buckles that look like this are kind of annoying because on that first buckle (not the one with the hole that the other one goes in) has a rubber thing on it so that once it's latched, it doesn't come undone easily...this is good, except that it makes the buckles a little harder to close...but I guess it's important to have them, for safety...

Anyway, those are some pictures....

GUESS what my weather bug says right now for the outside temperature?!

So. Remember this blanket I got Daisy on sale this last summer? I'm glad I got it on sale. Anyway, today I put it to use.

Sorry I have no picture of Daisy with it on :-( but I seem to have misplaced my camera battery charger...but I guess it was time for a new one...it's 3 or 4 years old lol. Anyway, I put it on Daisy this morning. She was scared of it. Finally I just through it on her and let her calm down. She did that strong snorting/roaring thing over and over again, but eventually she calmed down. She didn't understand why this *thing* was hanging over her entire body.

I let her off the cross ties, and she stood there like she couldn't move. I called her over, and she started walking, and then starting trotting looking scared and confused. She spooked herself! She'd look behind herself and see nothing and then she was so confuzzled because of that blanket. It was quite funny to watch her try to run away from the *scary* thing behind her that just *never* showed itself! Lol

She got used to it, though. She's had a blanket before, but that was before I owned her, so...

She's sleeping with it right now. It feels good to know she's comfy. :)

Unfortunately, because of ice, I haven't been able to ride her. :'-( She's getting very bored, and extra excited all the time...poor girl. But it looks like I will start boarding her this month already, Christmas time I think...so then we can ride.

Daisy tends to not engage her hindquarters AT ALL when we ride. Horses are supposed to drive themselves foreword with their hinds, but instead, she kind of pulls herself along. I didn't notice until the show in September, when someone pointed it out to me. And I notice it more, now that I'm riding only bareback again. When she canters, it feels like she is falling foreword, because she's not using her back legs. That could also be why her front hooves bruised so bad last summer...she uses them so much more. Anyway, I'm taking lessons this winter and hopefully we'll jump at the fair next year, once we fix her hindquarter problem ;-). 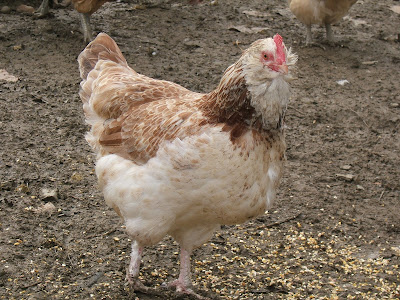 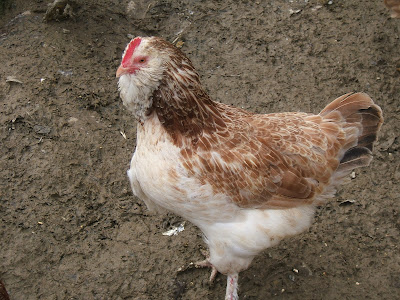 Hello again!
Sorry it's been so long.

So we went to the family's house who has our chickens presently.

And we got Bibbi back.
We are insane, I know--give 'em away, get one back.
But I'd like to say that, though they will be slaughtered, our chickens seem very very happy at their new home. They now have (*gasp*) their own rooster! A VERY pretty, golden rooster, which loves our chickens. We spoke with the wife of the man who picked up the birds, and she seemed very nice--they have 25 of their own (VERY beautiful) birds and she was kind and I believe our chickens won't suffer when they're killed, so I'm happy, I guess.
Anyway.
Bibbi was quiet on the ride home. She sat in a cat cage. We brought her up to the coop with Survivor in it, and I opened the "human" door of the coop, and then opened Bibbi's cage. She didn't come out at first, and then suddenly she came running out and she seemed to recognize the coop, and she jumped in and started eating food. Survivor looked like she was in shock, she was so surprised, but she was clucking, and she came off the roost and went and looked at Bibbi. Then she drank water. RIGHT away, she drank. Which makes us think that maybe she was too afraid to come off the roost to drink and eat before.

She and Bibbi seem very happy now. Bibbi used to be one of the quietest hens in the coop, but she's now the "leader" of her and Survivor--she comes right to the door and she's always just -there-....

She's also laying eggs! Only one every other day, but it's still nice! :)

So our two chickies are happy.