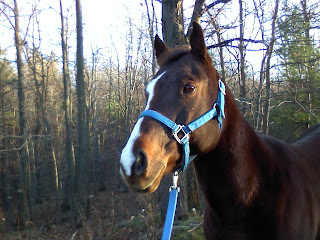 Happy Thanksgiving readers! I hope you're together with those you love and you get to eat lots of turkey (We will be. We bought a 23 pound turkey, then our guests fell through. So that's 5 people to eat 23 pounds of turkey, haha)
The things I'm thankful for don't really change every year, and I'm generally thankful for them all year anyway, but...they include such things as Jesus, Daisy, my family, and my various other pets. And friends. :) And experiences.
Daisy's been a pretty good girl lately. The day after she kicked me we went on a ride and it was pretty terrible...but alas, she seems to have gotten over it now. I had the pleasure of riding Bubba and my Laddie boy yesterday :) (Note: I call him "my" but he's not actually mine)(I have a fund goin'. You never know, one day he might be ;) ). It was a pleasure to ride both of them :)
I rode Daisy yesterday as well and we went for a nice ride to visit horses in the neighborhood. We seem to have more and more horses around here... if I think about it, there are 7-8 that we can reach for Daisy to smell noses over the fence.
We're going to start boarding at Jean's sister's around the corner soon. Should be fun to have Daisy somewhere new, and I'll feel better that, at least on days I can't ride, she'll have the company of Jenny's mares. :)
HAPPY THANKSGIVING!
I made a video in 2008 for Thanksgiving...it's kind of cute, and it still all applies.
http://www.youtube.com/watch?v=xXBJ99YmVCA 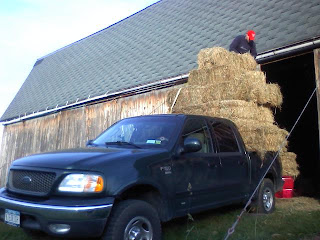 Not much has been going on. School is so hectic, as well as my extracurricular activities and concerts.
My dearest brother went and got a big load of hay with me last weekend. He has a short bed on his truck, but....he stacked them that high and we squeezed 40 bales on total. I was looking in the mirrors the whole ride home, sure I was going to see bales on the road behind us. 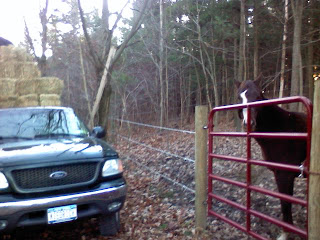 We unloaded them and I have about 60 bales in the shed now...and could have fit probably 20 more. It's good to know how much I could fit. Since I'll be boarding, it's not really necessary to stock up more than that for now. 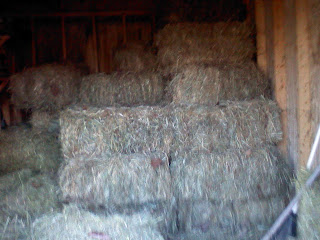 I've been riding Daisy very little...due to being busy after school, and the days I'm not seem to always be the days where it's too windy and/or rainy to ride. Because of this, Daisy had a lot of attitude the days we do go out. I went out with her on Thursday down the road...first time I asked her to trot, she plunged her head straight down to buck. She didn't get very far though; I had her head up fast again, I saw it coming. After that, the ride was truly marvelous. We road up this big hill on the road in the direction of home that we generally gallop. Even in the kimberwicke I had trouble stopping her once we'd start. Thursday, in the snaffle, bareback, I could feel her in my hands and when I asked her to stop in the middle of the hill, she was at a walk in seconds, no questions asked. Later, at a flat spot, I had her sidepass trotting back and forth across the road...At the schooling in October, Karin harped a little on getting Daisy to ride straight because apparently she's squirmy...I never noticed, but I've been trying to do that more now, and I realize when she sidepasses, it's always her front end sideways, then her hind end, which always gets left behind at first. I've been working a little on sidepassing with her entire body completely straight and getting her to sidepass her whole body at once. Going left, at the trot, she was amazing! :)
Today I didn't ride because it was opening day of hunting season here in upstate New York. I gave her a good grooming, then let her out and followed her out of her stall to get the wheelbarrow (err...muck bucket. The wheelbarrow has been out of commission for over a week because the wheel blew; with a full load, of course) and for no reason, I could see it in her eyes just before it happened, she kicked me and took off. She hit me in the upper leg, about a foot above my knee, on the side. Left a curved, hoof shaped bruise. ouch. It made me mad, of course, and I took off after her yelling and whacking her with a halter.
I'm thinking I'm going to have to go to being over-the-top about demanding respect from now on. Not a move shall be made that I don't specifically approve of.
Crazy mares. Can't live with 'em, can't live without 'em. 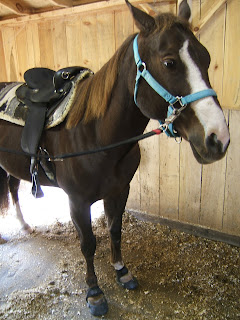 Hello, bloggers.
I was never really gone...just not at all motivated to post. Not for lack of things to post about, because I had a lot of stuff I wanted to post over the last month.
Here's a short overview (that really doesn't do it any justice).
I've been riding basically only bareback or with my new Abetta endurance saddle (see above) which Jean's sister sold to me for a very very generous price (Thank you!!). I love it! It's very light; I think Daisy enjoys it as well.
I've simply been enjoying Daisy, and getting back to basics. This month included a lot of work on stopping in the snaffle bridle. I regret not doing the schooling in the snaffle; she would have been fine. She's excellent in it now. I've been trying very hard to use all my aids when I ask for the stop, and my hands and reins as a last resort. She's doing well.
I've been trail riding often as well, and have taken her just in a halter and reins numerous times. She's been not quite as good as in the snaffle, but very close. One day I meant to only trail ride, so we went without a bit, and I ended up out on the road anyway because the trail was too wet. Once I got out there, I realized I only had a halter and reins. I took the chance anyway, and she was just fine, even on the road, cantering toward home, I had her stop right there. I've been riding carefully lately to make sure everything we do is a result of me asking her for it, not simply her guessing correctly what I want. Normally, in places where we canter, Daisy knows it and I just let her choose when we start cantering and that's all there is to it.  Now, I make sure she's at a very nice, controlled walk or trot and not anticipating the canter, before I ask for it. I've successfully gotten her to walk very calm in areas where before all she'd do was jig.
Daisy's hooves have held up excellently. This was our first full season on the 'natural' barefoot trim...if I wasn't 100% convinced before, then I'm 200% convinced now. She doesn't even avoid stones now; the majority of the time she'll walk/trot/canter over gravel without a flinch. Her hooves are never bruised (except a tiny spot that we found when she was trimmed yesterday from her bars being quite long) and she's a happy camper. I use her easyboots when time allows; she loves those as well. She seems to walk extra hard on the gravel those days, just to prove how awesome they are.
I love my mare. She makes my life complete. I can't imagine what I'd do without her. She's my go-to whenever I need a picker-upper...and she always succeeds in making my day. Some rides start out sour, but at the end of it, I look at the little things we've accomplished that day and I'm always immensely proud.
I've ridden over 60 horses in my almost 12 years of riding. There are very few moments where I am afraid on a horse. I realize however that one fear I do have, and admit to, is my fear of being run away with. I'm not sure why it's such a fear of mine. The last time it truly happened (at the trail trial, on Daisy), I wasn't really scared while she was really running; simply angry that she wasn't listening. So I guess a better way to phrase it is, a fear of being out of control. I know they're big animals and I have a lot of healthy respect, and I never let them get away with things. But if they truly want to do something, they will succeed. I feel almost constricted when I ride Ladd or Bubba, because they are truly very strong, and I feel like I lose control with each passing moment at a canter (mostly only out on the trail). I hate that feeling. I know deep down if they took off, it wouldn't be that bad, they'd eventually stop, and I can always one-rein stop. But it still scares me.
I've resolved to fix this fear, at least on Daisy. I'm going to practice letting her go all-out, and then get her back to a stop. I tried it a little today...such a silly fear. She was going full-speed, and I had her to a walk in 10 seconds, tops. It all depends on the day, though. 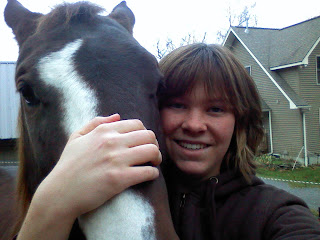 My oldest brother and I shared a trail ride together at Jean's. It was a lot of fun :) 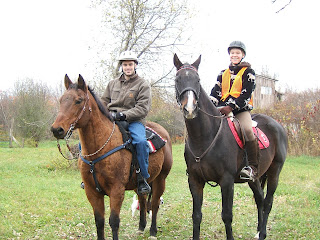 And last Saturday I had the pleasure of visiting my friend who lives about an hour away and I went riding with her, on a delightful draft-cross named Allie. :) 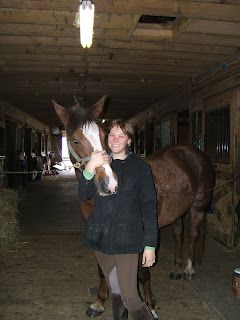