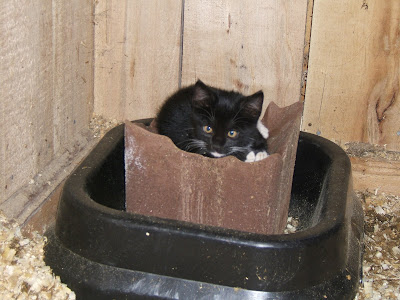 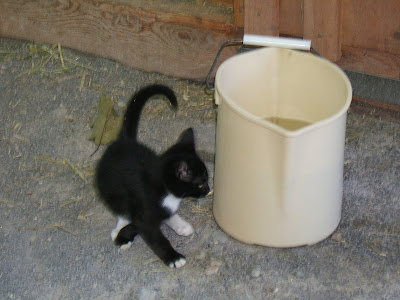 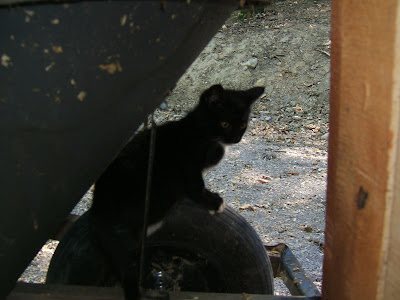 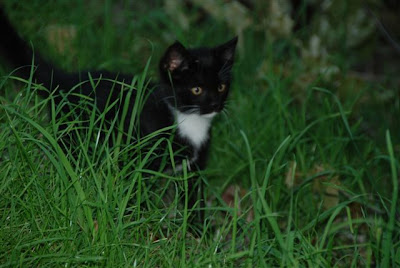 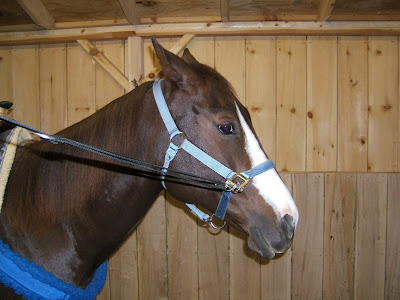 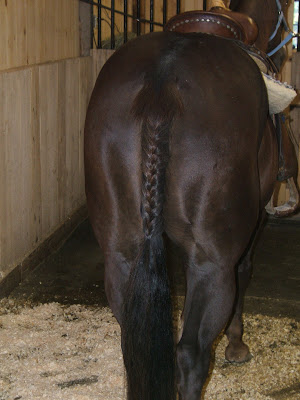 Hello! I know the last post was about Gronemeyer, too, but oh well. Now you get to see just pictures of him. The first one is of him on the salt block. He sits there a lot while I clean the stall or tack up to go riding and watches me. It's his little castle. The second one is of him outside by a bucket. He looks like he's dancing or something. I think it's really cute. I just love him. He is so joyful. The third picture is of him on the wheel of the wheelbarrow while I'm cleaning. He climbs all over the wheelbarrow like it's a jungle gym or something. The last picture of him is just really cute and clear. My mom took it, and I love it. The picture of Daisy is just of her at the cross ties while I'm tacking up. The last one is of her rear, I know. Every time I go on the road to ride I braid her tail to make her look pretty for the cars that pass us. It's kind of dumb, but I do it anyway. I french braid it, and I'm really good at it, I must say. Anyway, I just wanted to do a little update. My mom is going to Germany tomorrow, so I will post again this week if I can find pictures. She wants to see updates. I will do it for her (and you other bloggers) Pray that she has a safe trip, please, thank you! Good luck mom! Bye!
Posted by Mellimaus at 12:21 AM 7 comments:

This is our new kitten, Gronemeyer. There is actually supposed to be two dots on top of the "o", but oh well. My mom said that after we got back from my cousin's house for her Oktoberfest (I will post pictures), we could get a cat, and I looked in the newspaper today and found an add for a free kitten, and, voila, there he is. The lady said it was actually a girl, and that she couldn't find all the other kitten's she had (she was a little strange), so he was the only one, and we took him. On further inspection we realized that it was a boy.....or at least, we think (s)he is. :-) He will stay in the barn to hunt mice, and hopefully be somewhat of a companion for Daisy, although right now his is petrified of her. Haha. Anyway, this is a little video of him. I will post more pictures in another post. I also call him Grenuvie, but I don't know how to spell that, so.... We named him Gronemeyer because my uncle that died last January, Volker, said that he wanted to name a cat that. We named him Gronemeyer in honor of him. Herbert Arthur Wiglev Clamor Grönemeyer was a very famous singer/actor in . He wrote the best selling German language record of all time. Anyway, I hope you enjoy this video. I will hopefully post more this week. Bye!

I know, I'm not the greatest jumper. I really don't know what I'm doing, but oh well. I just put up some tree trunks and jumped. I was only about 1 1/4 feet high, but it's a start. Daisy hasn't really jumped much, either, so we're starting slow. I will post again in a few days. Bye!
Posted by Mellimaus at 8:45 PM 11 comments:

This is a video of me lounging Daisy today. My dad mowed a small clearing we have on our trail and it was perfect to lounge her, and she got some good exercise. School started today.....It was okay. Anyway, I just wanted to show you this video. I am going to go ride her one more time. Good night!!
Posted by Mellimaus at 10:42 PM 11 comments: 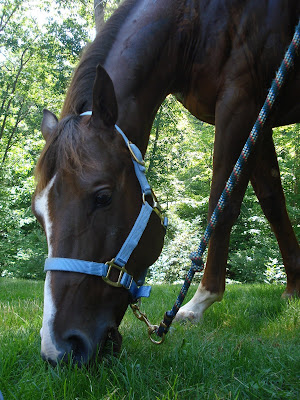 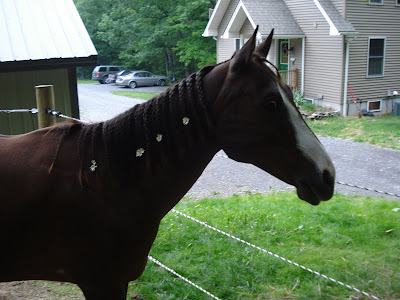 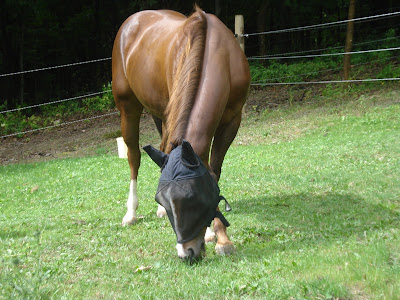 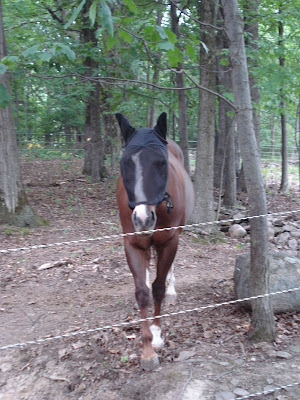 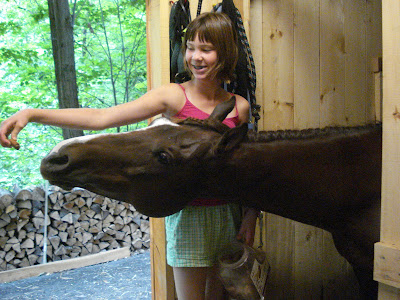 These pictures of Daisy are just random. I was looking through pictures that Anika, my cousin, took, and I thought these ones were cute. The first one is of her grazing after we rode her once, the second is of her looking at something......most likely me, making a lot of noise as I run out of the barn so that she would perk her ears for the camera, which is something that she never does. :-) We had to try really hard to make her do it. The third pic. is of her in one of her grass pens. Her paddock was once all open, but we had part of it separated into two pens so that we can rotate her through them so that grass has time to regrow. She goes galloping in them the minute I open the gate because she's afraid that I will close them. She has her priorities straight! The second to last pic. is of her in the woods, and the last one is of her in the barn. I'm teasing her with a treat and she's trying to get it without stepping in the tack room. Haha, I'm wearing my pajama's, sorry! Anyway, I just thought I'd update a little. School starts in two days. Ugh. Bye!
P.S. I added some pictures to my slide, although I think you've seen them all.
Posted by Mellimaus at 10:58 AM 10 comments: