Catchin' Up on Life-_-_-The Subject of Shoeing

Sooo...I haven't posted anything about Daisy lately so I have to do some sharing.

I was sick last week, which happened to be February break from school. I was also sick the week before, and came to the barn on Sunday, didn't go back until Wednesday, and then came on Friday again. That Sunday that I came, the farrier came as well. I recently read a very interesting, thoughtful book called "The Soul of a Horse: Life Lessons from the Herd" by Joe Camp (director/producer of the Benji movies I believe...) that my Uncle Gregor gave me for Christmas. All I can say is, if there is just one book you should read about horsemanship, it's that one. What an amazing read. It was an eye-opener completely. Remember the "roundpenning" video post I did awhile back? Normally, when I round pen (or I'm assuming other people) they put themselves in the position of the horse's "leader" as the do the join up. However, once they leave the pen, they go back to acting the way they did before. Joe Camp brought the join-up OUTSIDE of the pen, and it sounds amazing. It seems to take quite a bit of work and dedication, but I want to try what he did. I would HIGHLY recommend this book, please read it if you own a horse (and otherwise...it's a pretty heart-warming book for anyone who likes animals).

He also had an entire chapter devoted to horse shoeing, and mentioned the topic of shoeing throughout the book. I learned some pretty cool stuff. I myself shod Daisy last season and I would have this season, but this book changed my mind. Please don't be offended, I just want to share what I learned.

Did you know, that shoeing a horse's hoof makes it impossible for the hoof to flex naturally? Read this paragraph from the book, please:

Have you ever crossed your legs for such a long time that your foot goes to sleep? It's because you have cut off the blood circulation to your foot. Essentially that's what's happening when a metal shoe is nailed onto a horses foot. The hoof no longer flexes. Which means a substantial loss of blood circulation in the hoof. Which mean the nerve endings go to sleep. And the ill health the hoof is suffering from lack of circulation is no longer felt by the horse. In other words, the "ouch" never reaches the brain.

Is that powerful or what? I thought it was. It sounds pretty bad. Besides what that says up there, the shoe's nails make the hoof wall very weak. And the hoof can't flex.

Throughout the book, Joe will write one chapter about his own experiences, one chapter that he makes up about a herd of horses in the wild. He uses that herd to prove a point:
Horses weren't created to have certain things. They weren't meant to have shoes, blankets, barns, perfect little pastures, leg wraps, stalls, etc. I'm not saying I agree with everything he says. I'm going to continue to stable Daisy. I'm still going to use leg wraps. I'm still blanketing Daisy when it's below 15 degrees. But I don't want to keep shoeing her.

I feel kind of stupid. When I had Daisy shod last summer, she HATED it. Totally hated it. She reared, and she was just obviously uncomfortable. Partially that was because of the farrier, I admit. But it was also because she didn't like it. So WHY did I keep having her shod if I knew she hated it, and it became so stressful to have her shod because I knew she didn't like it? I kept doing it because I thought she needed it. I thought the ground was too hard for her hooves, and we were riding on the road, etc. Other people shoe because they jump, or rein, or barrel race, etc. But in reality, most horses don't need it. The first summer I had Daisy, I didn't shoe her. And her hooves got bruised and she was lame for a bit. I rode her through it, though, and within the 8 weeks between farrier visits, her hooves HAD hardened up, and she wasn't bruised anymore, and she could be ridden anywhere. Unfortunately, her hooves soften during the winter, and I don't want to go through her being lame and bruised again and waiting for her hooves to harden. Soooo...I'm not shoeing anymore because it's bad...But Daisy does have flat soles, and she has pretty sensitive feet. So I'm going to order (as soon as I can be sure of the size) Old Mac G2's. I originally read about them on the blog "7MSN". They are, in short, tennis shoes for horses, produced by EasyCare Inc. They slip on the horse's feet for when you go out riding, and are like shoes except that the horse's hoof can still flex naturally. Sounds good to me. They are kind of expensive, but if you think about it, you spend about $70 to have shoes reset anyway, and the shoes should last at least half a year. I've also ordered SmartHoof from SmartPak (Good quality, smartpak...if you ever plan on getting supplements, check SmartPak's version of it...it's cheaper and many times, better.)

So that's my story...I had a little drama with my new idea of not shoeing, so I just had to share. That's my reasoning. In any case, I still highly suggest Joe Camp's book, it's a cool read.

Sorry this post was so long...I've been sick a lot recently, so I haven't really ridden much. I've still been at the barn, but just doing groundwork. I've been pretty happy with that--I've taught Daisy to side pass (to the right) over a pole, which is good because before side passing and poles just didn't mix with her. We're working on the left side now. She seems to enjoy it...we're both getting a little sick of the arena, and can't wait to get back out on the trail.

I'll talk to all you bloggers soon...this post could take awhile to digest...well, as in, read, so....but in the meantime, read The Soul of a Horse! :D

For those of you who don't read my mom's blog, check her's out today! She posted ADORABLE pics of the chicks that we took yesterday...you'll like them I promise. And I happen to know she likes comments just as much as the next blogger, so leave her one. :)

Email ThisBlogThis!Share to TwitterShare to FacebookShare to Pinterest
Labels: chicks, photos by my most awesome mom ever in the whole world

The chicks have been here one day now and have already grown. That sounds outrageous but it's true...they grow super super fast. But they are still adorable. I'm very happy with the ones with have. We were told we may not end up being able to get the Delaware chicks, but we did end up getting them, which is cool. We ended up with 2 of each:
Black Sex Links
Golden Sex Links
Rhode Island Reds
New Hampshire Reds
Buff Orpintons
Silver (Laced? idk) Wyandottes
Ameraucana
Delaware

Cool mix. In the slide show below, I labeled the pictures and I labeled the breeds of the ones I could decipher...Last time we got chicks we only had one yellow one and she was "special" because of it, and this time we have 4 or 6! All so cute. The face on the wyandottes are so cute, too. We held a few today so my mom could take pictures...there is one that is so bold already, one of the wyandottes, it steps right up to the front of the box when you come while the others run. So adorable.
So this is a SHORT slideshow. Drag mouse over pic. to see caption,& feel free to us + - to go faster & slower.

Pics all by my wonderful Mom--thanks!

Email ThisBlogThis!Share to TwitterShare to FacebookShare to Pinterest
Labels: chicks

For All Those Chicken Owners...

I thought I'd tell you, in case you're interested, about this contest that Purina Mills is hosting, called "America's Fanciest & Funniest Chicken Photo Contest".

I got a postcard for it that says "Be a part of America's fanciest and funniest poultry photo conest by sending in your best shot of your fanciest bird struttin' his stuff or your funkiest chicken doin' his thing. Entries will be judged by employees of Purina Mills, LLC and will be lookin gfor the following criteria: Originality, overall artistic compesition, use of color, and photo quality. Enter at www.betteranimals.com/fanciestandfunniest . Two categories to win in: Fanciest Bird. Funniest bird. Limit 4 entries per household. Deadline is May 31, 2009. For complete rules see www.SunFreshRecipe.com

They show examples as being chickens with dresses on and stuff...soo I thought I'd tell you, in case any of you out there have dressed up your birds ;-). Maybe I will, Idk... :) 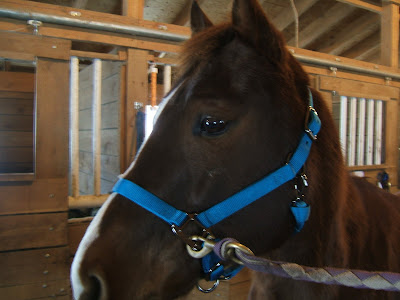 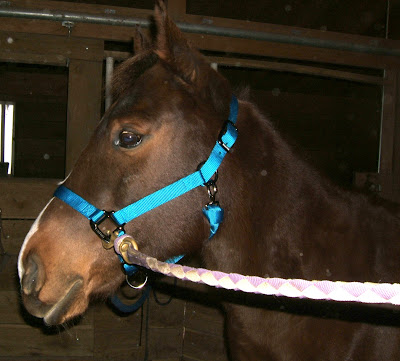 I bought Daisy a new halter, seeing as how I was still using the halters I got the week I bought her almost two years ago...I mean, they're nice halters, but....anyway, I searched a little online and was looking for a specific buckle for the throat latch on the halter...I found the weaver graphite halter which looked really cool...the blue was a little off from what I wanted but I went with it...I got the Hurricane Blue halter off ebay and it came with a free Blue Diamond lead rope...the lead rope is a little long and bulky but otherwise everything is nice. The hardware on the halter is really sturdy and looks metallic-y and sharp. I like it...so...that's all I have to say right now...

I've made a video of me jumping but as of right now it's still uploading to youtube...It will hopefully be up tonight sometime.:)

So what are you all doing today? Who's watching the Superbowl?
I'm not...I made a smoothie and ate cake...I'll probably watch it later just to get some Budweiser horse commercials ;-). Gotta love 'em.

Have a great Sunday in any case!

P.S.
Our chicks should arrive February 12...around that time...stay tuned for more on them. :)
Posted by Mellimaus at 2:59 PM 7 comments: